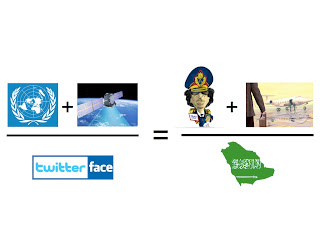 I don't know if this exists already, my five minutes of googling the topic left me equally convinced that it does AND doesn't exist already, but I have an idea of how to get round those pesky dictators shutting off the Internet mid-revolution.

I think that the United Nations should have a handful of low earth satellites on hand that they can quickly position over a country or a city to provide Internet coverage for the people; even if their feared leader has switched it off.

The only way for a dictator to get round this would be to shoot a UN satellite out of the sky which, even for Gaddafi-level crazy, would seem like a pretty risky proposition these days.

The cost wouldn't be cheap but maybe the UN could offset the venture by selling the music streaming rights to iTunes or by allowing the US to mount Stinger missiles on the satellites and use them as drones during non-revolutionary peace time periods.

If anyone knows how I could fund this as a start up, please let me know, I think demand is only going to grow...
Posted by neil @ GMT+8 at 6:51 PM

BGAN already provides global broadband coverage. Satellites can still easily be jammed though, and you misunderstood low earth orbit. Things in LEO can't stay over an area. You were thinking of GEO, geostationary orbit.